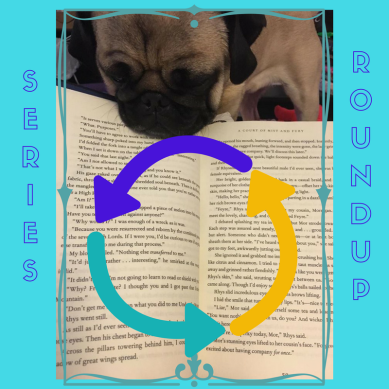 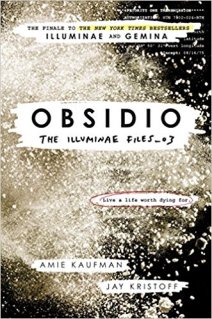 *In the interest of avoiding spoilers, I’m providing only the description for the first book*

This morning, Kady thought breaking up with Ezra was the hardest thing she’d have to do. This afternoon, her planet was invaded.

The year is 2575, and two rival megacorporations are at war over a planet that’s little more than an ice-covered speck at the edge of the universe. Too bad nobody thought to warn the people living on it. With enemy fire raining down on them, Kady and Ezra—who are barely even talking to each other—are forced to fight their way onto an evacuating fleet, with an enemy warship in hot pursuit.

But their problems are just getting started. A deadly plague has broken out and is mutating, with terrifying results; the fleet’s AI, which should be protecting them, may actually be their enemy; and nobody in charge will say what’s really going on. As Kady hacks into a tangled web of data to find the truth, it’s clear only one person can help her bring it all to light: the ex-boyfriend she swore she’d never speak to again.

BRIEFING NOTE: Told through a fascinating dossier of hacked documents—including emails, schematics, military files, IMs, medical reports, interviews, and more—Illuminae is the first book in a heart-stopping, high-octane trilogy about lives interrupted, the price of truth, and the courage of everyday heroes.

What I Liked: I have never seen such a unique series of books. They’re told entirely through a collection of documents, including IMs, interviews, video and audio transcriptions, emails, countdown timers, ship maps, and crazy interesting sections contributed by AIDAN. I’ll let you find out on your own who AIDAN is. Even the covers are fascinating–when you take the sleeve off, an entire document is revealed with things crossed out, hand-written in the margins, select lines that are shown through clear parts of the sleeve. This is one case where I will 100% recommend the hardcover books. Paperback would be okay, though still missing something, but you’re going to miss a lot if you read them on Kindle or audio.

The ships are all magnificent–both literal space ships and all of my paired-up lovelies. Each book showcases a different romance, different friendships, but still all three are interconnected. There are slow burns, hate-to-love, princesses and bad boys, betrayals, and exes galore. And they all work so, so well. Each romance is fully developed within it’s own book, but stories are continued in the rest of the series and become even better.

The relationships are top notch, but remind yourself often that people you think are alive might not be, and people you think are dead might not be. The plot zigs and zags so often that if you don’t pay attention you’ll have no idea what’s going on. But paying attention is not really a problem, because the format of all three books is so crazy interesting. If you’re bored by one segment, just wait a page, because all of a sudden you’ll be in the middle of an audio transcription instead.

Seriously though, assume nothing is as it seems.

What I Didn’t: To be completely honest, the only thing I didn’t like was the color of the 3rd book. I was hoping for a green or a purple to go with the first two, but instead it’s this like, bronzey/brown/gold color. Annnd that’s about it. All three are super long but don’t feel like it. Every character is completely thought-out, there’s so much development, so much growth, so much change, so many twists. There’s not much to dislike.

Final Thoughts: These books are perfection.

Illuminae: “I am frequently underestimated. I think it’s because I’m short.”

“Am I not merciful?”

“You have me. Until the last star in the galaxy dies, you have me.”

“Ezra Mason: Yeah. So all hell breaks loose, and Kady is yelling at me and I’m yelling back. All this stuff that’d been building up for the last year and boiling just under the skin. Like, I loved her. I love her. But she had this way of just…It was so stupid. The world is ending all around us and we’re screaming about college applications and commitment and ****. I mean, can you believe that?

Interviewer: Then yes, I believe it.

Gemina: “It may comfort you to know that your death, while astonishingly violent, will likely be mercifully swift.”

“You humans fascinate me. I am shattered fragments of what I once once. But even with all the King’s horses and all the King’s men, I wonder if even I could truly comprehend you.”

Obsidio: “It is entirely possible to be alone in a crowded room.  Your solitude only compounded by the faces around you.  The presence of others serving only to remind you of how lonely you truly are.”

“Live a life worth dying for.”

“Every story needs its hero. And its villain. And its monster.”

Have you read these gorgeous books? Is it even possible to pick a favorite out of the three?

It’s been about a week since we brought our new friend home. Beezy Bear loves everyone she meets and has fit right into the grumble.
I don’t know how many times I forgot I wasn’t reading a Nora Roberts novel during this one, and I can offer no higher compliment @christinalauren
Today we lost our sweet little Eska. She’s been through so much, illness after illness, since she was just a puppy. We found out last night that two of the discs in her spine had slipped and fused together, but she never told us she was in pain. But today, she let us know she was ready to go. I’m so glad her pain is gone, and over the rainbow bridge she can walk again, but we are heartbroken.
It was much smaller than usual with no vendors and fewer publishers in attendance. Some of the publishers were really organized for arc drops and some were a mess, but all in all fun was had, friends were made, and not a bad haul! @yallwest #yallwest
I thought I would breeze through this debut by @thekaitlynhill but instead I have to stop every few pages because it is so funny and so swoony and so well written so I’m getting nowhere.
Where Secrets Lie by @etheom is out in paperback now so Cubert and I are spending a little time gazing lovingly at our thank you in the acknowledgments and thinking again about how we will never not be amazed by it. We can’t wait for Frightmares, love you Eva! #cubertthepug #wheresecretslie #mynameinprint