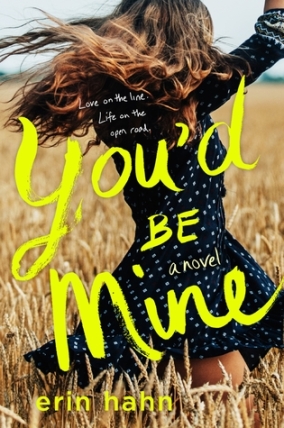 Annie Mathers is America’s sweetheart and heir to a country music legacy full of all the things her Gran warned her about. Superstar Clay Coolidge is most definitely going to end up one of those things.

But unfortunately for Clay, if he can’t convince Annie to join his summer tour, his music label is going to drop him. That’s what happens when your bad boy image turns into bad boy reality. Annie has been avoiding the spotlight after her parents’ tragic death, except on her skyrocketing YouTube channel. Clay’s label wants to land Annie, and Clay has to make it happen.

Swayed by Clay’s undeniable charm and good looks, Annie and her band agree to join the tour. From the start fans want them to be more than just tour mates, and Annie and Clay can’t help but wonder if the fans are right. But if there’s one part of fame Annie wants nothing to do with, it’s a high-profile relationship. She had a front row seat to her parents’ volatile marriage and isn’t interested in repeating history. If only she could convince her heart that Clay, with his painful past and head over heels inducing tenor, isn’t worth the risk.

Erin Hahn’s thrilling debut, You’d Be Mine, asks: can the right song and the perfect summer on the road make two broken hearts whole?

What I Liked: You guys, OMG. I have So. Many. Feelings about this book. It came my way at Yallwest last spring, when it was still just a bound manuscript without the actual cover yet, and looked like this: 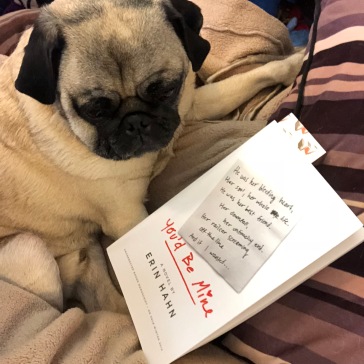 As pretty as the real cover ended up being, I still love this one too

But when I read the blurb, I wasn’t convinced it was for me. I do not like country music, and I do not like organized religion. I take special issue with the way the church tells teenage girls that they’re less than, their bodies are sinful, the things they think and feel are wrong..ahem. I’ll stop, but be assured that I could go on about this for eons. Like I said, I wasn’t sure I’d like this one. But it didn’t take long until I was Tweeting the author this:

♥ Clay. I’ve seen some hate for him in the blogosphere, with readers criticizing his treatment of Annie at times, and the way he chooses to deal with his problems. Now, I’m a staunch defender of women, so I don’t want to get into defending what Clay says and does, because he’s not a perfect person and he does make some mistakes. But Clay is also still only a kid with no actual adult looking out for him or his well-being.

So no, he’s not really doing a bang-up job of taking care of his pain. He’s not really dealing with the grief that he’s in the midst of, so he’s doing what a lot of 18 year olds do to mask the pain–he’s drinking too much, he’s flirting too much, he’s partying and getting into fights too much. Not a single person in his life recognizes this, until Annie comes along.

♥ Annie. God, do I love Annie. She’s the daughter of country music legends, but she’s got her own damage since her parents’ murder-suicide. She didn’t plan on joining the country-music scene, but something about Clay draws her in, so she and her band jump on his summer tour as the opening act.

Annie’s into Clay, and makes mention often of what she refers to as her “lady parts” in reference to her attraction to him. But she’s also religious, and I wasn’t sure how that would play out. As I’ve mentioned before, I grew up in a super religious household, church every Sunday, Youth Group and Bible Study every weekend, VBS every summer, forever and ever amen. It was a world where more than holding hands was bad, showing your shoulders was bad, and having sex was out of the question bad. It was so bad that it wasn’t even discussed, it wasn’t watched on TV or in movies, it wasn’t read about in books, and if you did watch or read about it, then you were sinful and bad, too.

Is this how all organized religion presents premarital sex? Probably not. But this was my experience, and therefore how I expect and fear all other girls will experience it (boys did get the same lectures, but we all know it’s never the same for boys). So guys? When I read this and saw the position that the author was taking on the subject? I WAS SO DELIGHTED!

“Should you wait for marriage to have sex? That’s between you and Jesus. Bible school said to wait. Bible school also said I shouldn’t wear a two-piece bathing suit. I didn’t get cast into the fires of hell for my transgressions, so I doubt Kacey boinking a red head is any worse.”

And I mean, there really isn’t a lot more said on the subject so I don’t want to wax on about the subject and make it seem like there’s a super religious tone to the book, because there isn’t. It’s not preachy or judgmental, it doesn’t demand purity, and it doesn’t give off a “boys will be boys and girls will sit quietly” vibe. What I do want to say is that this is the kind of book that I could have used when I was growing up. It presented a religious girl in such an open and realistic way. It’s teenagers behaving the way that some teenagers behave. Some drink, some don’t, some have sex, some don’t, some try drugs, some don’t. And all of that is okay. All of that is normal. All of that is what I really could have used as a teenager, to hear that this was normal and valid by someone else in that crazy religious world.

♥ Really though, this book is so much about the music. And even though I DO NOT LIKE country music, it somehow didn’t matter? Because I still really loved this book?

I loved the concerts, the songwriting and recording, the differences between Annie and Clay’s kind of music. I got some Open Road Summer vibes while reading, which was super satisfying. But the June and Johnny Cash duets that Clay and Annie start performing on tour? Those were THE BEST to read about. Could I picture them so clearly because I was doing a mashup of

in my head? Sure, maybe. Either way, they were fun and I could have read chapters full of them. Their chemistry was crazy, and their playfulness and charm on stage was clear all the way to the back row. There was SO MUCH TENSION waiting for them to get together.

What I Didn’t: Very little. There are some pacing and editing issues, things like the location moving in the middle of the scene without notice, but I suspect those will be fixed in the finished copy.

⊗ Kissing. I could always use more kissing and more sexy times, but that’s my personal preference and it wasn’t necessary to the book.

Final Thoughts: I loved this book without expecting to at all, and I’m so happy I did. In full honesty, I decided to read this one now because I follow () Erin Hahn on Twitter, and she posts a ton about writing and publishing. Since her book doesn’t come out until April, I’d been planning on reading it a few months from now, but lately I’ve been seeing a lot of political posts from Erin that I really feel on a deep level, and something about the way we’re on the same page politically made me decide to open this one up now. DID NOT DISAPPOINT, PEOPLE!
Favorite Quotes: “This song is a confession and a condemnation in one; regretting something that was over before it even began. But I know, I know, it would have been big.”
“I don’t even know what to do with that except I can’t ever stop this.”
All quotes are taken from an uncorrected proof of the book

5 thoughts on “Review-You’d Be Mine by Erin Hahn”