There are the old stories. And then there’s what actually happens.

Kihrin is a bastard orphan who grew up on storybook tales of long-lost princes and grand quests. When he is claimed against his will as the long-lost son of a treasonous prince, Kihrin finds that being a long-lost prince isn’t what the storybooks promised.

Far from living the dream, Kihrin finds himself practically a prisoner, at the mercy of his new family’s power plays and ambitions. He also discovers that the storybooks have lied about a lot of other things things, too: dragons, demons, gods, prophecies, true love, and how the hero always wins.

Then again, maybe he’s not the hero, for Kihrin isn’t destined to save the empire.

Uniting the worldbuilding of a Brandon Sanderson with the storytelling verve of a Patrick Rothfuss, debut author Jenn Lyons delivers an entirely new and captivating fantasy epic. Prepare to meet the genre’s next star.

Praise for THE RUIN OF KINGS

“[A] jaw-dropping, action-packed story of betrayal, greed, and grand-scale conspiracy . . . Lyons ties it all together seamlessly to create literary magic. Epic fantasy fans looking for a virtually un-put-down-able read should look no further.” ―Kirkus, starred review

“It was one hell of a ride. I gobbled it up and was hungry for more.” ―Glen Cook, author of The Black Company

“The Ruin of Kings is a fascinating story about a compellingly conflicted young hero in an intriguingly complex world.” ―L. E. Modesitt, Jr., author of the Recluse series

“A thriller plot of revenge and loyalty with a get-under-your-skin and keep-you-reading-all-night mysetery at its heart. I loved it.”―John Gwynne, author of Malice

“The Ruin of Kings revs up with the glitz of a high-speed, multi-level video game, with extreme magic and a teen hero with angst.” ―Janny Wurts, author of The Curse of the Mistwraith

MY REVIEW:
I was SO taken by the description for this book. Finding out that you’re the long-lost prince? Dragons? The hero maybe not being the hero after all? Yes, please! I’m super here for all of that. The book is told by alternating narrators in alternating time frames, which can get a little confusing, because all three timelines feature the same characters, and I was never clear on exactly how far apart they were supposed to be. Sometimes it seemed like years, sometimes it felt like a few months. You also have to try to keep track of who is where when, who knows what when, and then there’s the little matter of body swapping. So some characters might not necessarily be who you think they are.
One of my favorite things is when a book is presented as a document, like Illuminae Files. That’s how this one is set up at the beginning, and we’re reminded of it throughout by the footnotes left by the person compiling all the information. I always think it’s fun to read something that’s not written in the same format as everything else, so this was perfect for me.
Going into the book, you don’t want to know too much because the whole thing is full of twists and surprises. But here are a few things to keep in mind: This sucker is LONG. It’s 560 pages but feels much longer somehow. There are also a thousand characters, and all of their names are super similar so it can be hard to keep track. There is a glossary in the back, and you’ll be flipping back and forth for it a lot.
Make sure you follow the rest of the tour here!
TEN QUOTES FROM RUIN OF KINGS:
ABOUT THE AUTHOR

Jenn Lyons lives in Atlanta, Georgia, with her husband, three cats, and a lot of opinions on anything from the Sumerian creation myths to the correct way to make a martini. At various points in her life, she has wanted to be an archaeologist, anthropologist, architect, diamond cutter, fashion illustrator, graphic designer, or Batman. Turning from such obvious trades, she is now a video game producer by day, and spends her evenings writing science fiction and fantasy. When not writing, she can be founding debating the Oxford comma and Joss Whedon’s oeuvre at various local coffee shops. 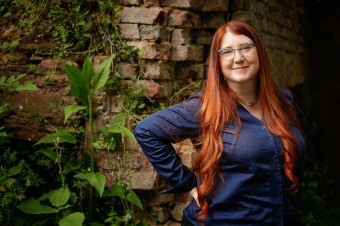 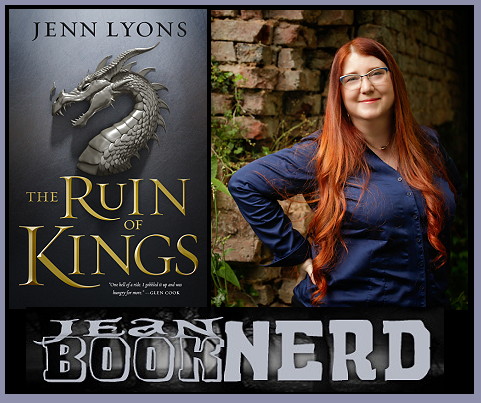 And now, for the giveaway!

3 thoughts on “The Ruin of Kings by Jenn Lyons Official Blog Tour-Review, Tens List, and a Giveaway!”

I don’t know how many times I forgot I wasn’t reading a Nora Roberts novel during this one, and I can offer no higher compliment @christinalauren
Today we lost our sweet little Eska. She’s been through so much, illness after illness, since she was just a puppy. We found out last night that two of the discs in her spine had slipped and fused together, but she never told us she was in pain. But today, she let us know she was ready to go. I’m so glad her pain is gone, and over the rainbow bridge she can walk again, but we are heartbroken.
It was much smaller than usual with no vendors and fewer publishers in attendance. Some of the publishers were really organized for arc drops and some were a mess, but all in all fun was had, friends were made, and not a bad haul! @yallwest #yallwest
I thought I would breeze through this debut by @thekaitlynhill but instead I have to stop every few pages because it is so funny and so swoony and so well written so I’m getting nowhere.
Where Secrets Lie by @etheom is out in paperback now so Cubert and I are spending a little time gazing lovingly at our thank you in the acknowledgments and thinking again about how we will never not be amazed by it. We can’t wait for Frightmares, love you Eva! #cubertthepug #wheresecretslie #mynameinprint
May the power of @erinhahn_author get me through this 5 am airport day #builttolast #savannah #girlstrip